Around about the time that the Sma’ Shot cottages were being built, Paisley was becoming a thriving manufacturing town, attracting economic migrants from the surrounding countryside. The First Statistical Account of Scotland estimated that towards the end of the 18th century over 26,000 people were involved in the manufacture of textiles in Paisley. James and Patrick Clark had both arrived in the 1750s keen to take advantage of the opportunities that the local weaving trade offered. They would eventually set up their own business in Cotton Street to make silk thread that would be used in the ‘heddles’ that are one of the central parts of a loom. During the Napoleonic Wars silk became unavailable due to a blockade in 1806, but in crisis came invention and opportunity. Patrick Clark invented a way of twisting cotton yarns together to produce a thread that was smooth yet durable enough to be used in both heavy and domestic settings, and the brothers soon realised that selling cotton thread for domestic sewing had the potential for great profit. In 1812 they established a mill on the site of the current domestic finishing mill. They chose this spot due to the fact that the existing layer of volcanic rock that runs across the River Cart, known as the ‘Hammils’, increased the force of the water flow, forming a waterfall, therefore making it an ideal way to power mills that had been becoming increasingly mechanised since the 1790s. This location is the starting point for the history of large-scale cotton thread manufacture in Paisley.

As the Clarks brothers were busily developing their own business, the Coats name was also establishing itself in thread manufacture in Paisley. James Coats was born into a Paisley weaving family in 1774, and after an early career in the army, he returned to Paisley and set to work in the local textiles industry. Coats became involved primarily in the production of crepe shawls and embroidered goods. As his fortunes increased, Coats became a sleeping partner in a local firm of thread twisters, and together with his knowledge of twisting gained through Canton crepe production, he would be well placed to focus on thread production. By 1826, with the continued development of new machinery and methods thanks to the industrial revolution, and the growing success of the Clarks brothers in the town, Coats set up his first thread twisting mill using a 12 horsepower engine, just behind his house in Ferguslie in 1826.  Four years later he retired, and left his business to his sons James and Peter, giving birth to J. & P. Coats. One of the brothers, James, died early, and another brother, Thomas, stepped in to the family business. Over the next few decades the brothers developed the Ferguslie site, but they were also casting their eyes further afield. By the 1840s, the Coats firm had established selling agents in North America, after sending one of their brothers, Andrew, over there to manage their growing business interests. However the Coats were not the only family in Paisley with international ambitions, as the Clarks had also embarked upon creating a network in the North American market. In 1864 George and William Clark opened a cotton thread mill in Newark, New Jersey. In 1869 the Coats followed suit, establishing a mill in Pawtucket, Rhode Island, and operating under the name ‘Spool Cotton Company’.  It was deemed important not only to gain a foothold in this emerging market, but also an efficient way to get around import bans in the middle of the nineteenth century. These factors encouraged expansion, and by the latter part of the nineteenth century, Coats had branches in the USA, China, Brazil, and India. 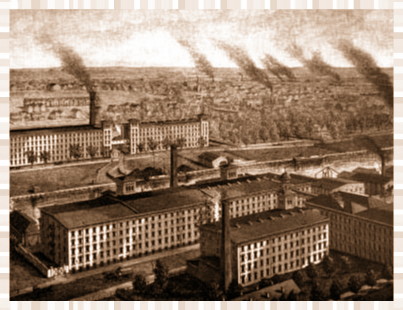 Memoryscapes: How Mile End got its name

Harry Green discusses how Mile End got its name.