The Death of Thread

Changes to the company’s structure from the late 1960s reflected a number of important factors that would signal the slow death of the thread industry in Paisley. By 1960, the company name had changed to J. & P. Coats, Paton and Baldwin Ltd after the purchase of the latter in this year, and the 1960s would see the trend of buying up other competitors that had been a hallmark of the firm for so long continuing unabated. This included the purchase of the firm that produced the famous ‘Ladybird’ children’s wear, and Jaeger fashions who commanded a large retail chain in the UK. In 1967, Coats Patons amalgamate with Vantona Viyella to become Coats Viyella plc, until finally the business became known as Coats plc in 2001. Eleanor Clark remembered how the business underwent a series of structural changes during the 1960s:

“It was united thread mills, then it was J and P Coats, UK Ltd, and then in ‘66 it was Coats UK, and, in the ‘60s, that’s when they bought over various companies, like, they merged with, Paton and Baldwin, I think that was about ‘66, but they took over things like, different shops, em, and many of them were high street shops, which they later used for Jaeger, when they joined up with Jaeger.”

These changes in the domestic market were mirrored by international business developments as the company increasingly carried out its production of thread overseas, taking advantage of lower labour costs. Coats had for over a century a large network of international production centres, and staff would be sent all over the world to train, administrate, and manage these facilities. One respondent, Ross Moodie, spent time in places such as Portugal and Columbia, looking after the company’s production interests. At one point, Ross had to undergo strict assessment by the company:

“I rang up Glasgow personnel, said, you know, ‘remember me? I’m still here. Any overseas jobs going? And they said, ‘yes’, so, at that point I was put on the mill management trainee side, rather than just dyehouse, you know, for general production role, and did what was called then ‘the board’. You were put through a series of different interviews with directors, and you had to answer a lot of questions, and hopefully you got them right. And then assessed by a psychologist, in Edinburgh, and, you know, he did a report on you. And, funnily enough, I’ve got a copy of that report, that was given to me last year, and it makes pretty frightening reading anyway!”

David Goldie spent many years in Portugal, where he introduced modern mechanical and managerial processes to the mills that would produce 12 tonnes of thread a week, which was then exported under the watchful eye of the Central Agency to various Portuguese colonies, including Angola, Mozambique, and parts of North Africa. David recalled:

“All the selling was done through Central Agency, which was part of the Coats organisation…so we sold in a lot more countries than we produced in, around the world.”

Eventually, more and more local people would rise to managerial positions, and this process reflected the changes that were happening globally, as international production became more cost-effective at the expense of those working in the Paisley mills. Labour and production costs were lower in other parts of the world, and orders to the Paisley mills began to dwindle. The workers could see the writing on the wall at this time.  May Vassie remembered noticing how these changes were affecting working life in the Paisley mill flats:

“Well, there wisnae the same orders for the work. They were cutting back and cutting back. Certain areas it was just £500 of work when it used to be thousands and thousands of pounds at a time, you know. You’d have a book, a production book, and you seen the difference, ‘oh, we don’t need this amount, we don’t need that.”

The first iconic change to the mills in Paisley was the demolition of the Atlantic and Pacific mills on the Anchor site. These had been designed for the spinning and twisting processes respectively, but after almost a century of production, they were closed and pulled down between 1972 and 1973. Both of these mills were iconic, but by the time that they were demolished, they were becoming dilapidated and unsuitable for modern production methods. Harry Green remembered this time well:

“It cost too much. It puzzled us why they closed down Atlantic and Pacific, you know, to start with, but when you looked at the state of the buildings, they wouldn’t take modern machinery.” 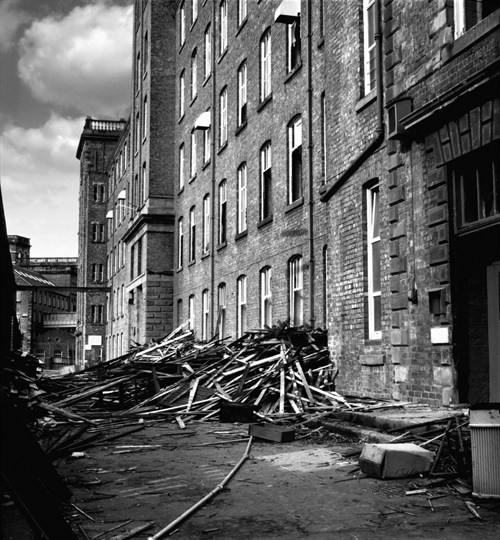 This was part of the company’s ‘rationalisation’ process that witnessed many other buildings at Anchor and Ferguslie fall into disuse. May Vassie remembers 1978 and having to go through further reorganisation at her work; by this time, just as the Anchor site was being gradually cleared of its buildings, so too was the Ferguslie site being run down. Many workers felt disappointed at the manner in which the thread industry was being wound down, and some felt that they were being kept in the dark about it. As May Vassie commented: “well, we were sold doon the river.’Willie Riddell remembers how, towards the end of its existence, the Ferguslie site still employed at least three thousand people, so one can appreciate the impact that the ‘rationalisation’ process was about to have on Paisley. As Willie says, the gradual closure of the mills was itself a precursor to the general decline of manufacturing in Paisley: “It was a shame, I mean, it wasn’t just the mills that was closing down, the whole of Paisley, that was the start of it.” People were worried as closure loomed. Eleanor Clark, who worked in different personnel roles, recalled the mood in the local area as the end was approaching, and how people were concerned:

“In the last year or so, there weren’t many jokes. It was quite sad. My hours kind of lengthened a bit, because, folk had to come in and give their worries to somebody, and, unfortunately, it was me. So sometimes, you know, by the end of the day I had to work on a bit to get my work done because I had to spend time with people, but what else can you do? Because people were devastated, you know, if you’re not going to have any work, and you’re always used to working, and having money to pay your bills, it’s daunting to think you’re not going to have this, and what you’re going to do.”

By 1984, the Ferguslie site was being completely run down, while much of the Anchor site had been sold off. The iconic Number 1 Spinning Mill in Ferguslie, which was Category A listed, was demolished in 1992 due to its physical condition and economic unviability. In this same year, the Anchor site was also sold off to a developer, who had intended to pull the remaining buildings down. Thankfully, Paisley Council stood firm on this issue, and refused given their listed status. By the time the Number 1 Mill was pulled down, the rest of the Ferguslie site had become derelict. Eleanor Clark, who remembered people’s concerns about closure, also had strong memories about the time when the Ferguslie site was being cleared, especially the fate of the Number 1 Mill:

‘I think Number 1 mill, it was a disgrace that that went. When that was built, the architects magazine gave a double page spread to it, because it was such a remarkable building, etc, etc, and it was, and it was a listed building, and it was an absolute disgrace what happened to it. But, you see, when you get cowboys coming in that don’t care about anything, you know….’ 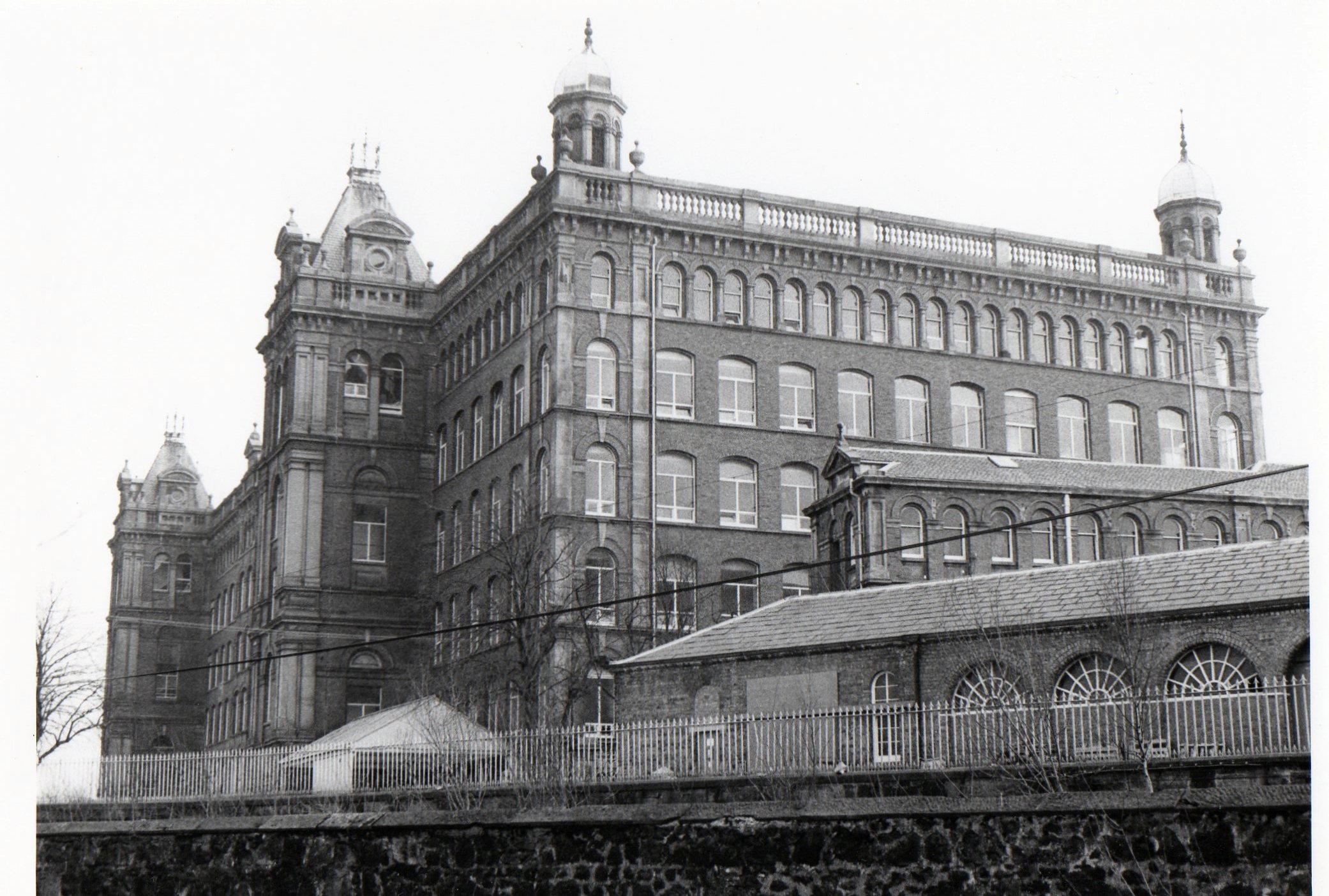 The site has since been cleared, and has for the most part been developed for domestic housing. However, there remain fine examples of buildings on the Ferguslie site that date back to when thread manufacture in Paisley was at its pomp, including the North Gatehouse, and the Counting House. Nonetheless, the demise not only of the magnificent Number 1 Mill, but of the site itself, reflects more broadly the development of international business and production methods. Thread manufacture in a global context just did not make economic sense in Paisley to those who operated at boardroom level, and Coats itself had long-since given up on the town that had made its name famous throughout the world.